Ontario municipalities will hold elections on October 24, with advance polls beginning early October. In Hamilton, this election will decide the mayor and ward councillors who comprise Hamilton City Council. All McMaster students, provided they reside in Hamilton, can vote in the election. If you missed the chance to vote on campus on October 18, you can still vote on Election Day. Click here for community polling location information.

Many students will not be on the voters list – this is OK and you can still vote on Election Day (October 24) at your ward specific polling location.  At the polling station, simply provide acceptable ID to demonstrate your Hamilton address, or you may make make a statutory declaration. If you live on-campus or rent a room / apartment in Hamilton, you are eligible to vote in Hamilton. Students living in residence can access a proof of residency form via Mosaic. Many students living off campus will use a utility bill, a lease agreement or a university transcript to prove their Hamilton residency, as their government issued ID likely includes a non-Hamilton address.

Anyone at McMaster University can vote on October 18 in CIBC Hall – regardless of where they live in Hamilton.

NEW THIS YEAR: The McMaster community has access to a special ballot-on-demand polling location in this election.  On October 18, from 10am-7pm in CIBC Hall (MUSC 3rd floor), any student, staff, or faculty member can vote for their preferred councillor and mayoral candidates. This special polling location will allow McMaster community members, no matter where they live in Hamilton, to vote on campus. This is different than a traditional advanced poll, which are ward specific.

The MSU will host a mayoral debate in the Atrium of the McMaster University Student Centre (MUSC) on Monday, October 17 at 2pm. All members of the McMaster community are welcome and no registration is required. The debate will be live streamed via the MSU’s Facebook page. 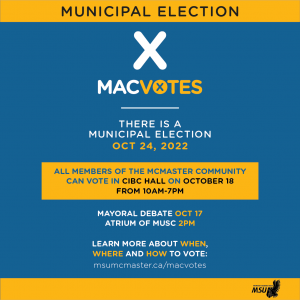